- December 03, 2018
One of the benefits of joining the Military History Society of NSW is the occasional military related excursion.


This is a report by Society Council member and former Royal Australian Navy NCO Dennis Weatherall on a ship visit to HMAS Choules at Fleet Base East Garden Island, Sydney on Wednesday, 28 November 2018.


What a day we awoke to! Navy being the Senior Service just loves being at sea, but too much of a good thing (rain) can definitely try to spoil the day, especially if it happens to be a one in 100 year storm. But didn’t. Fourteen hardy souls mustered at 09:00 at Garden Island Gates last Wednesday morning in the deluge.

We were met by the ships training officer Lt Andrew Mcguigan and the Fleet Ships Liaison Officer  Ms Karen Thorn. From the name list provided the security office already had all the Visitor Passes ready for allocation to those that braved the weather.

So spot on 09:30 in a lull of the lashing rain, we entered Garden Island (known now as Fleet Base East) and proceeded to board HMAS Choules. It was the steepest and longest gangway I’ve ever climbed to board any Naval ship in my life. We were welcomed on deck by the Duty Quartermaster (who happened to be an Army Corporal) then proceeded into the inner sanctum of this very large ship, where we were met by none other than the Commanding Officer, CMDR Scott Houlihan. 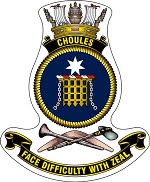 HMAS Choules was built for the Royal Fleet Auxiliary (RFA) by Swan Hunter Shipbuilders, Wallsend-on-Tyne, UK. She is a Bay Class Amphibious Landing Ship Dock Ship and one of four such vessels built for the fleet within a fleet, the RFA. She was laid down 28 January 2002 and launched 18 July 2005. She was commissioned into the RAN on 13 December 2011. HMAS Choules displaces 16,190 tons, is 178 metres in length, has 26.4 metres beam and 6.8 metres draught, cruises at 16 knots and has a range in excess of 15,000 kilometres at 15 knots (28 miles per hour for land lubbers).

RFA’s are built to commercial maritime specifications and this ship carries such internal markings a Naval people would refer to as Damage Control and Compartment Markings, not Naval type markings. In the RFA she was manned by Merchant Navy crew not Royal Navy (RN) officers or sailors. The RFA have their own ships captains and standard merchant seaman crew types.

The current Commanding Officer (CO) was part of the selection and trials crew when it was mooted the RAN may (originally) lease such a ship. The reason why the Navy wanted such a “Heavy Lift” vessel was for that reason, to lift heavy equipment such as  bulldozers, large road making equipment and clean up type equipment, and to be ready to sail anywhere anytime to assist in time of need. For example as post cyclone damage and lift and carry urgently needed food and supplies for a stricken city or town in the wake of a civilian emergency, both here in Australia and where needed around our close neighbouring countries. This type of vessel is ideal. The Brits were being forced to downsize anything military due to financial restraints and we happened to have an immediate need for such a vessel. Apparently the RFA didn’t want to see her go, but were forced to do so by the Government of the day.

The powers that be decided to purchase outright what was the “RFA Lares Bay” Pennant number L 3008.

The vessel underwent extensive testing by the RAN shadow crew and the ship was dry docked and brought up to Australian requisite standards. Interesting is the fact she has a Lloyds of London Commercial Certification that the RAN keeps current, to cruise ship general requirements. All crew, currently 150 Navy and 20 Army, have their own shared merchant navy type cabins with own shower and toilets (what a ship for your first sea going posting, it’d spoil you rotten). Senior NCO’s and Officers have their own single cabins ... time to reconsider re-joining the “Grey Funnel Line” but my age is now a technical problem. On board there’s 488 bunks, cots, beds whatever you’d like to call them. That means they can embark in addition to their crew a further 318 Army personnel as required. She is a ship without self-protecting weapons, for her task is to lift and carry, but can be weaponised if the situation should ever arise on her humanitarian duties.

Soon after the ship arrived in Australia you may recall the media hype about it being a lemon. The fact was the generators had a built in design fault. It was discovered and as HMAS Choules had probably done more continuous steaming (Naval term for being driven) than when in the employ of the RFA, it was the first ship to experience the breakdown of the generators. All six were replaced and I believe the Brits are doing the same with the three ships they have left so they won’t have the same future problem.

We then visited the ships “parking lot”. Its space was as big as any of our aircraft carriers, huge is the only word I can think of that describes the below upper deck space. This becomes the Army’s job to load, first on is last off. The vessel has a stern that lowers and turns into a ramp, so landing craft can actually enter the dock area and disgorge the equipment. This docking area is flooded to the depth of two metres to take landing craft internally. The vessel also has a side hatch that allows the ship to dock alongside and disembark its load direct onto a wharf area, if one is available.

Then it was off to the ship's bridge. As it was built to Merchant Navy standards, there are steps, not ladders to climb. The steps are wide enough for two people at a time to climb or pass on the multi flights, five in all to reach the bridge. Then when you think you’ve made it, there are two more smaller single ladders to the top. The bridge is fully electronic, no helmsman, the navigator sets the course and speed. The “skipper” signs off on the plan and the vessel heads off to its destination. HMAS Choules has amazing manoeuvrability with bow thrusters and “pods” (rudder and propellers combined) that can turn the vessel 180 degrees in its own length. The bridge is very spacious and with the modification undertaken before delivery the Captain can actually step outside the port and starboard wing areas and manoeuvre the ship from these overhanging wing areas that are inside the bridge itself, and all from a square box the size of a small table.

You’ll see on the above photograph a canvas tent on the deck. This was for a temporary helicopter hanger the RFA had fitted. Currently HMAS Choules only embarks helicopters as the need arises to assist with troop movements ashore or to lift and carry. There’s no immediate consideration to have a permanent helicopter attached to the vessel. The flat long aft deck is usually used to stack shipping containers up to two high when she is deployed in her humanitarian tasks.

On behalf of those brave “all weather” men that made the visit, we officially thanked the Captain for his excellent briefing and tour over his command, and came ashore a little past noon as “SCRAN” (lunch) was about to be served. Once again the gods kept the weather to a minimum as we exited the Island and headed home. It was an excellent visit.

By the way, I sent on Wednesday afternoon an official signal via his assistant (Lt Andrew Mcguigan) to reconfirm our sincere  thanks for permission to come aboard and especially to say thanks to the CO for his personalised tour. One thing I forgot to mention was the superstructure, it’s referred to as “The House” by CO and crew.

Why not become a member? Visit the website's membership page here: http://militaryhistorynsw.com.au/home/membership/

Popular posts from this blog 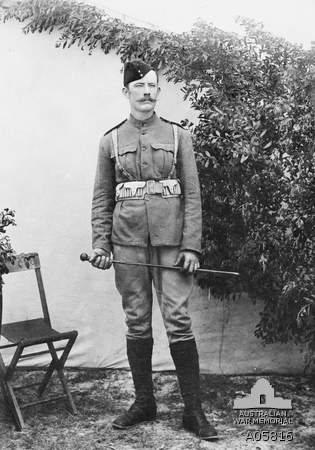 Lt Peter Handcock O n Anzac Day this year journalist Peter FitzSimons wrote an article published in the Sydney Morning Herald calling for the removal of the name of Lieutenant Peter Handcock from the Bathurst, New South Wales, Boer War Memorial on the ground that he was a convicted war criminal, for which he was executed by firing squad alongside Lieutenant Harry "Breaker" Morant  in South Africa on 27 February 1902. Handcock was a Bathurst district local. James Unkles is an author, former naval reserve officer, military and civilian lawyer, and campaigner for a pardon for Morant, Handcock and the third convicted man, George Witton. On 30 May 2021 James posted a response to FitzSimons on his website. The response notes that on 4 May 2021 the Bathurst Sub-Branch of the RSL wrote to Bathurst Regional Council, which controls the monument, opposing the removal of any names from the Memorial. A copy of the letter is reproduced below. Bathurst Regional Council has declined to re
Read more Second Lieutenant Gordon Sharp The Society’s lecture on Saturday, 4 December 2021 at Anzac Memorial Hyde Park, Sydney, was given by Major (retd) Paul Handel RFD on the topic ‘Australian Armour at Long Tan’. The lecture was attended by Paul Mitrovich of the Army Museum Duntroon. Paul brought with him for display the original map found on 2781465 Second Lieutenant Gordon Cameron Sharp of Tamworth, New South Wales, who was killed in action early in the Battle of Long Tan, 18 August 1966. Gordon Sharp's original map Second Lieutenant Sharp, a television cameraman in civilian life, was called up as part of the first national service ballot in March 1965. He received officer training at Scheyville and in June 1966 was posted to Vietnam with 6th Battalion, Royal Australian Regiment. He was in command of 11 Platoon, D Company when he was killed. It is reported that visibility was hampered by monsoonal rain when he raised himself from the ground to better observe his position and direct g
Read more Lt Harry 'Breaker' Morant - By James Unkles Background In the service of the British Empire, the Australian colonies offered troops for the war in South Africa. Australians served in contingents raised by the six colonies or, from 1901, by the Australian Commonwealth. About 25,000 Australians volunteered to serve in the war. The war is also remembered for the controversial trial and execution of Lieutenants Harry ‘Breaker’ Morant and Peter Handcock and the imprisonment of George Witton for shooting Boer prisoners. On 27 February 1902, Morant and Handcock were executed, while George Witton was imprisoned. Historians have claimed these men were used as scapegoats for the political interests of British military commander Lord Kitchener and his political masters. Evidence has emerged these men were not tried and sentenced according to law and advocacy continues with the aim of addressing this injustice. A House of Representatives motion tabled by Scott Buchholz MP on 12 Feb
Read more